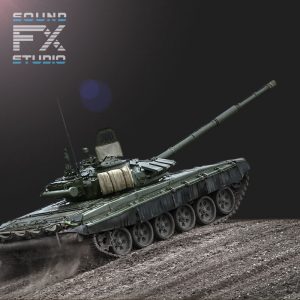 T-72 Hit sound from the T-72 Tank SFX sound library – the sounds when the tank hits an obstacle. The library includes 13 audio files and the detailed PDF-instruction for developers on how to use it.

Late model T-72s, such as the T-72B, featured improved turret armour, visibly bulging the turret front—nicknamed “super-Dolly Parton” armour by Western intelligence. The turret armour of the T-72B was the thickest and most effective of all Soviet tank armour; it was even thicker than the frontal armour of the T-80B. The T-72B used a new “reflecting-plate armour”, in which the frontal cavity of the cast turret was filled with a laminate of alternating steel and non-metallic layers. The glacis was also fitted with 20 mm of appliqué armour. The late production versions of the T-72B/B1 and T-72A variants also featured an anti-radiation layer on the hull roof.

Listen to the T-72 SFX entirely